A few weeks ago on Last Week Tonight,”  John Oliver lampooned the growing use of “historical” quotes as a means of legitimizing current political opinion. While this is by no means a new problem, it has gone viral through the use of memes, such that, as Oliver said, “If you have the right font and the right photo, any quote can seem real.” Oliver proceeded to put up a website (http://www.definitelyrealquotes.com/) with a set of historical photos randomly combined with dubious quotes.

While Jane Addams doesn’t appear on his site (Marie Curie and Amelia Earhart do), you can find many lists of Jane Addams’ quotes and illustrations, most noble-sounding and completely unattributed. How many of them are accurate? It can be difficult to be certain that someone did not say something, and until we are able to transcribe the entire corpus of Addams’ work, we can only offer initial results–but there are enough problems that you should be wary.

Searching for this text in Google Books, in quotes, results in a hit from James Weber Linn’s 1935 biography of Addams, Jane Addams (p. 104). He claims that it comes from an 1892 paper given at a Plymouth, Mass. summer institute on ethical culture, but provides no citation. Linn uses the quote two times in the biography, the first rendered: “The good we secure for ourselves is precarious and uncertain . . . until it is secured for all of us and incorporated into our common life.”  A few pages later Linn uses the quote again, this time without the ellipses.

What was missing from the quote? In this case, it wasn’t much. It came from “The Subjective Necessity of Social Settlements,” which was republished in Philanthropy and Social Progress (1893), p. 7. The excluded portion is not terribly significant, but by omitting it, it becomes harder to locate the source of the quote using search engines. We’ve highlighted the differences in orange:

The good we secure for ourselves is precarious and uncertain, is floating in mid-air,  until it is secured for all of us and incorporated into our common life. 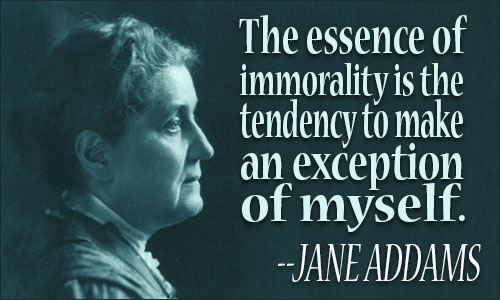 “I once heard Father Huntington say that the essence of immorality is the tendency to make an exception of one’s self and I would like to add that to consider one’s self in any wise unlike the rank and file of human life is to walk straight toward the pit of self righteousness.”

Addams refers to Father James Otis Sargent Huntington (1854-1935), founder of the Order of the Holy Cross, a monastery near West Point in New York. So while Jane Addams “wrote” it, she credited the sentiment to another. Her own addition isn’t half bad though!

Jane Addams wrote this too, though the beginning of the sentence was removed. It is from A Second Twenty Years at Hull-House (1930), p. 101, and says:

“As congress at Honolulu proceeded we felt that Oriental women had unique opportunities to stand free from the tyranny of mechanization and to act upon the assumption that civilization is a method of living, an attitude of equal respect for all men.
This is a good example of a specific sentence being turned to serve a far broader purpose.  Citations help us to determine whether or not the quote is being used properly when it is pulled from its context.

Several lists of quotes (WisdomQuotes and AboutEducation for example) credit Jane Addams as the author of this William Shakespeare line from Measure for Measure. This one has been attributed to Sun Tzu, Machiavelli, and Michael Corrleone from the Godfather. And, per Goodreads, to Jane Addams as well.

Many of the quotes out there are accurate, though few have citations. Below are some that have been verified.

Action indeed is the sole medium of expression for ethics.

As most historians and students working on history papers know, you should not quote people without citing the source of your quote. And that does not mean the website where you saw the meme or the “Jane Addams Quotes” page you found on an anonymous website (see right).

Try to locate the quote in its original context. That means finding it in one of Jane Addams’ own writings, not on a website or secondary source.  A good tactic for locating a good source is to search one of the book sites that have full text for public domain books (Google Books, Internet Archive, Hathi Trust, to name a few). Most of Jane Addams’ books are in public domain, which makes things easier. Using the original texts will not only ensure that the quote is correct, but seeing it in its context will give you a better sense of what Addams meant.

You may find that your search turns up a huge number of hits. Just like on the web, book authors cite quotes from Jane Addams and other famous people, and many of them do not cite the source of their quote either! To get to Addams’ own works, you can limit the date of publication to between 1870 and 1940. You might be tempted to use searches that narrow the author as well, but you may miss documents from compilations with an editor or author.

Putting the text in quotes will narrow your search dramatically, but remember that it will only work if the quote you search for is accurate. If a word is wrong or missing, you may not be able to find it, though it is mostly accurate. So if the whole text does not come up, try a phrase that seems unique, like “precarious and uncertain” or “affection and the real interest of the nation.”

Dig deeply, and if you have too much trouble verifying the quote, don’t use it!

One Reply to “Did She Really Say That? Jane Addams Quotes on the Web”